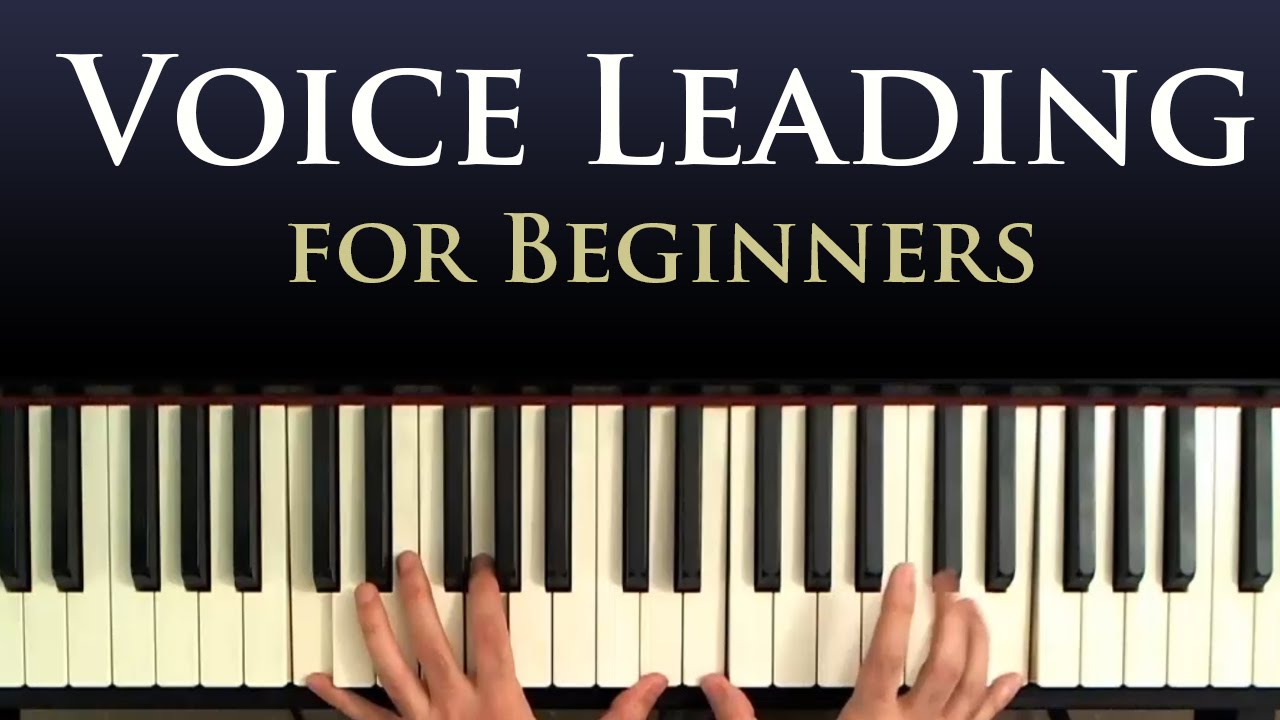 Lessons
Share on Facebook
Share on Twitter
Share on Pinterest
Share on LinkedIn
Voice leading refers to the gradual motion of notes as we switch between chords in a progression. In this piano tutorial we will use a simple 2-5-1-6 progression in the key of C major (C-Am-Dm-G) to demonstrate some of the unique concepts that underlie successful voice leading. This lesson is geared towards beginners and will show you how good leading can be used to upgrade your chord voicing and take your playing to the next level. It will be followed by a more advanced tutorial which will focus on more jazz-oriented concepts, but here you will be exposed to the basic ideas.

In counterpoint, voice leading (American) or part-writing (British), also part leading, or the guiding, management, progression or conduct of parts, is the rules regulating the melodic movements of individual parts (voices), or the application of these rules by the composer:

“The progression of the individual parts or voices in a vocal or instrumental composition.”
“Voice leading is the term used to describe the linear aspect of musical writing. The individual melodic lines (called voices) that make up a composition interact together to create harmony.”
“Voice leading is the smooth movement of the notes (or voices) from one chord to the next, and it applies to any type of voicing.”
“The art of connecting chord to chord in the smoothest manner possible.”
“Each voice in the texture is led from one pitch to the next in a way that forms a pleasing melodic line while producing in consort with the other voices a pleasing succession of harmonies.”
Principles of voice leading include the importance of outer voices, contrapuntal motion (including contrary motion), parsimony (the retention of common tones), and dissonance treatment.
“Good voice leading can take a simple chord sequence and transform it into a masterpiece.”

For a regular conjunction of chords in the accompaniment, three main principles are generally considered, namely:
1. When a chord contains one or more notes that will be reused in the chords immediately following, then these notes should remain, that is retained in the respective parts.
2. The parts which do not remain, follow the law of the shortest way (Gesetze des nächsten Weges), that is that each such part names the note of the following chord closest to itself, if no forbidden succession arises from this.
3. If no note at all is present in a chord which can be reused in the chord immediately following, one must apply contrary motion according to the law of the shortest way, that is, if the root progresses upwards, the accompanying parts must move downwards, or inversely, if the root progresses downwards, the other parts move upwards and, in both cases, to the note of the following chord closest to them

My channel has many additional piano tutorial videos which I welcome you to check out. The main channel page is:
http://www.youtube.com/user/MangoldProject?feature=watch

Here’s an interesting video about voicing the 2-5-1 progression:

How to modulate between keys using the 2-5-1 progression:

My playlist of inspiring piano harmony, chord and voicing tips and tricks:

(Inside you will find additional major chord voicing ideas for piano!)